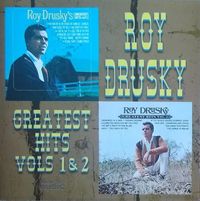 In this week's episode we're cherry-picking the best hard country cuts from our twin feature albums on Roy Drusky: "Greatest Hits, Vols. 1 & 2" [1965, 1968]. Blessed with a heckuva radio voice, when Drusky's baseball dream didn't materialise he found work as a DJ at several stations before coming to prominence as a songwriter. Hits with Faron Young and others in the late 50s eventually lead to a contract with Shelby Singleton's Mercury outfit in 1963. Seen largely as Mercury's answer to Eddy Arnold, Roy Drusky's smooth baritone fell firmly into the country crooner category; a subgenre out of favour with country fans today (a fact which might explain Drusky's relatively obscurity despite his success). However, with a keen ear for a good country song, Roy Drusky cut a number of great traditional country songs during his 60s heyday and we'll pull 'em out for ya this week!