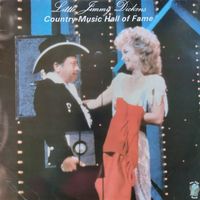 In this week's show we're featuring a later career album for longtime Opry staple and country music fixture Little Jimmy Dickens: "Country Music Hall Of Fame" (1984). The front cover indeed depicts the moment Dickens was inducted to the Hall Of Fame after four years of nominations; a plaque tucked under his arm while being greeted on stage by Barbara Mandrell and trying not to shed a tear. For a man so long in country music, Dickens was best known for his Opry appearances, razor sharp wit and for being simply a "part" of the industry. Most fans could recognise his name but Dickens' own catalogue remains overlooked. We change that this week with "Country Music Hall Of Fame": the album Porter Wagoner called Dickens' best-to-date and an appropriate slice of the 4'11" "Tater" - his versatility and sterling treatment of a good country song is on full display. From the showstopping tearjerker "Raggedy Ann" and the peppy "She'll Party At The Drop Of A Hat" to the lovelorn "Holding On To Life", Dickens' place as "part of the Opry furniture" hides a very long and fascinating career and a voice that didn't seem to age.