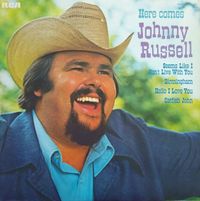 In this week's episode we're featuring the final album in Johnny Russell's six short years at RCA Records: "Here Comes Johnny Russell" (1975). A big man with a big heart and a big voice, Russell turned to songwriting in his mid-teens (mostly out of necessity) and in 1959 scored a B-side on Jim Reeves monster "He'll Have To Go". Russell's "In A Mansion Stands My Love" got the attention of Chet Atkins and it was that relationship which bore fruit many times over for the talented Mississippi entertainer. "Act Naturally" from Russell's pen proved highly lucrative when Buck Owens and a slew of others cut it in 1963 onwards, and he was soon hired to The Wilburn Brothers' Surefire Music where he worked for a number of years. Like many performers however, Russell wanted to sing - growing frustrated at his lack of opportunities he even moved back to California for a time before Atkins finally put him on RCA in 1971. Recognition in the form of several hits songs came Russell's way and his output over six years remained consistently strong. "Here Comes Johnny Russell" is an enjoyable listen and worthy of a feature this week.