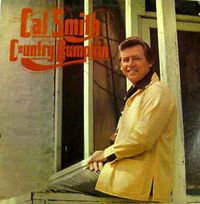 In this episode, we're featuring an oft-overlooked album from Cal Smith: "Country Bumpkin" (1974). The title track itself, of course, was Smith's biggest and most enduring hit, immortalising his impact to generations of fans. However, many listeners never got past big hit single to the rest of the album, which is a surprisingly modern yet traditional release, overseen by master Walter Haynes in the producer's booth. Cal Smith brings his relaxed-yet-sincere delivery to an extremely well chosen collection of covers - as well as a few originals - employing the talents of master songwriters including Don Wayne (of course), Tommy Cash, Hank Cochran, Red Lane and Bill Anderson. From his days as a San Jose DJ to rhythm guitarist with ET's Texas Troubadours, "Country Bumpkin", in it's entirety, is Cal Smith's finest release, and really does deserve to be heard past the infectious "frost on the pumpkin" lyric. Highlights include "Between Lust And Watching TV", "Jesus Is A Good Ole Boy" and a pair of back-to-back Loretta Lynn hits in "They Don't Make 'Em Like My Daddy" and "Love Is The Foundation". Dig a little deeper to be rewarded.