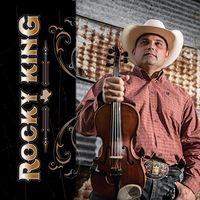 In this episode, we're featuring the self-titled debut album from Texas dance band The Rocky King Band (2015). After having picked up the bug for traditional country and western swing music early on, bandleader Rocky King took fiddle lessons as a child with the iconic Jody Nix. Years of hard work have paid off, for this album is truly a treat from woe-to-go. A better collection of dance tracks I haven't heard in some time: from a refreshing version of "Mental Revenge" and the two-step-ready "Wearin' A Label" and "You're In Love With The Wrong Man" to the romping opener "Play The Saddest Song On The Jukebox", the covers are expertly chosen - both familiar and obscure. The Rocky King Band don't miss a step: kept in check by Michael Polasek on a rock-steady shuffle drumbeat, and complimented by Kenny Grohman on steel and the magnificent Duane Wavra on upright bass and harmony vocals. Wavra's gritty vocals are a treat on "Dark Lighted Bar Rooms", which I feel is the peak of a Texas dancehall masterpiece.