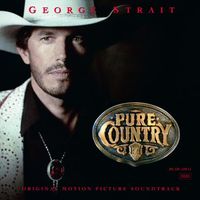 In this episode, we're featuring the best-selling album of George Strait's illustrious career: "Pure Country" (1992). As the soundtrack to the movie that was George's acting debut, it's not a huge departure from what he'd been doing up until that point - nay, more of the same. But the same formula proved to be a winning one yet again, and some 25 years later, "Pure Country" remains his best selling record - having sold over six million units since it's release. In the film, Strait plays Wyatt "Dusty" Chandler - a disillusioned country music superstar who wants to get back to his roots. The soundtrack album reflects that - songs like "Heartland" and "Where The Sidewalk Ends" straddle the line of country pop/rock from the early 90s - whereas songs like "Overnight Male", "King Of Broken Hearts" and "She Lays It All On The Line" are firmly in Strait's more accepted traditional camp. The acting left something to be desired, but this soundtrack is a sensational snapshot of an era where George Strait could do no wrong.