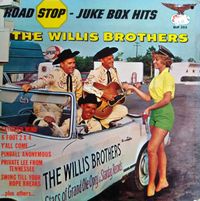 Big, bright, bold, vivid, colourful and appealing - it could only be a Starday album! And that's what we've got this time for another piece of bonus content this week - usually exclusive to our Patreon members - it's called "COVER TO COVER", where we take a great traditional country album and play it right the way through, from front to back, in order and in full. And trust me when I say it's music you won't hear anywhere else - we specifically check to make sure our COVER TO COVER albums aren't on Spotify before featuring! Aside from the regular show, we'll be doing COVER TO COVER at least once a month for our Patreon members at any level and intermittently I will be releasing a COVER TO COVER episode as a podcast to you here, but for the most part, this feature is intended as a piece of bonus content - so enjoy! This time we go cover to cover on a typical Starday album for The Willis Brothers: "Road Stop: Juke Box Hits" (1965). The unmistakable high hillbilly harmony of The Willis Brothers found at home at Starday and they enjoyed their biggest hits in the early 60s, including (as on this album) plenty of cleverly-written uptempo novelty material.