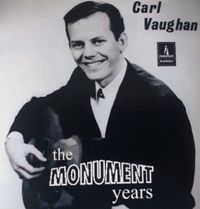 In this week's episode, we're featuring a snapshot of Carl Vaughan's stint in Nashville: "The Monument Years" (1968-1972). Born in Cleburne, Texas, Vaughan took a job at the tender age of four on a local radio station and proved a very adept entertainer, playing over the next several decades to big crowds around the DFW area in some of the roughest bars and clubs on the circuit. During a very popular residency at "Rustler's Rest" in Fort Worth, where Vaughan and his band were playing and packing 'em in six nights a week, Nashville sent a producer down to see what all the fuss was about. A well received spec session followed in 1968, and suddenly Vaughan had offers on the table from five of country's biggest labels. He elected to sign with Fred Foster and Bob Moore's Monument Records and over the next four years were born some very successful singles that saw Carl Vaughan tour from coast to coast, playing most all major US cities and states and even Ronald Reagan's first inauguration celebration. Never having set out to be a musician, however, Vaughan moved back to Texas in '72 and dabbled in many business interests while keeping busy with music all the while. Our feature album this week is but a taste of Carl Vaughan's range and versatility in country music, which as we'll hear, continues to this day.