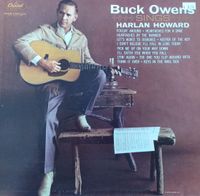 In this week's episode, we're featuring one of the best albums in the long career of Buck Owens: "Buck Owens Sings Harlan Howard" (1961). Born in Detroit and barely receiving nine years of formal education, Harlan Howard relocated to Tucson then Los Angeles in the mid-fifties seeking a steady wage. It was there he was introduced to several early Bakersfield pioneers, including Wynn Stewart and Buck Owens. Extremely handy with a turn of phrase, Howard's stock skyrocketed when Charlie Walker cut "Pick Me Up On Your Way Down" and the following year Ray Price and Guy Mitchell's versions of "Heartaches By The Number" prompted a move to Nashville, where the songwriter earned the nicknames "The Irving Berlin Of Country Music", "Dean Of Nashville Songwriters" and "Mr. Songwriter". Few in country history have had as many hits with as many artists, and Howard's partnership with Buck Owens is legendary. This album, put out shortly after the third Owens/Howard hit in "Foolin' Around", has Buck covering several current hits from the pen of Harlan Howard, as well as many more from the deep songbook of the talented writer. Set in an era before the tele twang element of the Bakersfield sound had come to fruition and before Don Rich was let loose on harmony vocals - if you had to buy only one Buck Owens album, "Buck Owens Sings Harlan Howard" may well be it.