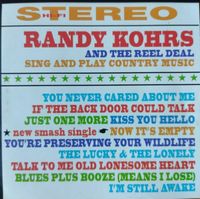 In this week's episode we're featuring the one album release for dobro-maestro Randy Kohrs and his short-lived band The Reel Deal: "Now It's Empty" (2003). Produced by the Iowa native in his own Slack Key Studio, "Now It's Empty" was mostly recorded without overdubs using Royer, Vintage RCA and Fostex ribbon microphones to emulate a 1950s feel. With several originals fitting the mould beautifully, well-chosen covers from the George Jones catalogue, James O'Gwynn and a couple from Stonewall Jackson slide into that old school vibe nicely and Kohrs bluegrass-suited tenor lead vocal gives a strong foundation on which to lean. Production remained understated yet twangy and with steel guitar from the sensational John Hughey (still sounding magnificent even in his late 60s), "Now It's Empty" is a solid album that went under the radar at the time and is worth a re-listen.