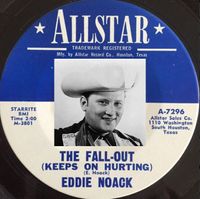 In this week's episode we're focusing on Allstar Records, a part song-poem part legitimate commercial label operating between 1953-1966 in Houston, Texas. Aside from his song-sharking tendencies, Allstar's founder Daniel James Mechura no doubt had his eyes set on recording hit country music, frequently hiring above-par backing musicians to back up Allstar's roster of artists. And that roster is all the evidence you need to see that Allstar was a legitimate commercial music operation - the talent and track records from the likes of Wiley Barkdull, Jerry Jericho and Eddie Noack (all of whom recorded for Allstar) speaks to that. In fact, we've got the microscope on the sensational hard country output of Eddie Noack on Allstar this week (1962-1966): releasing ten songs with the label during that period (many self-penned), Noack continued his Texas honky tonk ways, including a stylistic nod to the super successful Buck Owens formula on several. Noack had a long and diverse career but he was sounding honky tonk ready at Allstar!