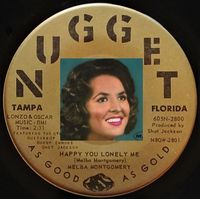 In this week's episode we're featuring Melba Montgomery's complete Nugget Records sessions from the year 1962. Shortly after having spent almost four years touring with Roy Acuff's roadshow and marginally before being snapped up by United Artists, Melba was offered a chance to record for Lonzo & Oscar's newly-relocated Nugget Records in Goodlettsville, Tennessee. The result was ten sides which have largely been forgotten by country fans who focus instead on her duets with George Jones and UA solo material. Ten hard country nuggets (pun intended) all of which feature Shot Jackson on dobro and Buddy Emmons on steel. The two co-founders of the legendary Sho-Bud steel guitar company help push these Nugget recordings on a young, fresh and distinctive Melba Montgomery to the heights of honky tonk gold. Superb listening.