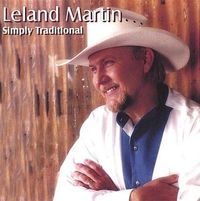 In this week's episode we're featuring a 2002 independent album whose name says it all from Missouri's Leland Martin: "Simply Traditional". Born into an impoverished family with eight siblings in the ironically named Success, Missouri, Leland Martin learned how to pick the guitar early on and wound up working some pretty rough venues with his younger brother as teens. Following his marriage at seventeen, Martin took a job at a sawmill and later as a truck driver, picking music on the weekends and building a loyal following around the area. A brief stint as lead guitarist with Freddie Hart in the early 80s revealed that a musician's life on the road wasn't for Martin, but it took another fifteen years before his first album materialised. IGO Records took a chance on the 45-year-old in 2002 and "Simply Traditional" received enough of a response for a series of follow-up albums. "If I Had Long Legs (Like Alan Jackson)" was a fun, who's-who of 90s country (and also a minor chart hit); Wanda Vick's melancholic dobro punctuates the big-rig themed "Stone Cold Fingers" (a topic Martin knows something about); the steel-dreched wordplay of "Freddie's Hart" was enough to have Martin's one-time boss join in on duet vocals. An excellent independent album from Leland Martin warrants the spotlight this week on "Simply Traditional".