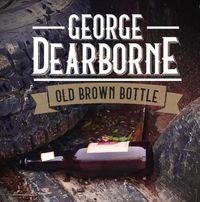 In this week's episode we're featuring the debut album for Beaumont's George Dearborne: "Old Brown Bottle" (2020). Make no mistake though, this is not Dearborne's first rodeo. Embedded in the area music scene during the 70s and 80s, Dearborne met a teenage Mark Chesnutt when he himself was only a few years older. Years later, Dearborne and his renowned band "Branded" would become the house act at the Beaumont's legendary low-slung honky tonk Cutter's - a position held by Chesnutt only a few years prior. Nashville didn't work out for Dearborne however, and he gave music away for 22 years, picking it up again in 2016 and reforming "Branded" with new and all-star personnel. Fast making a name for himself around the Lone Star State, "Old Brown Bottle" is a welcome debut for traditional country fans who enjoy straight ahead country shuffles with a good sense of fun. The best pickers money can buy appeared on "Old Brown Bottle" and you can hear the quality with every track. Highlights are numerous: the steel guitar intro from Mike Johnson on "One More", Wes Hightower's blending with Dearborne's lead vocals on "A Fire That Just Won't Burn" and two Ray Price shuffles are obvious standouts.