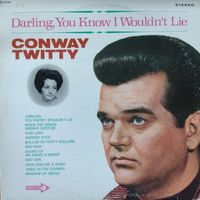 In this week's episode we're featuring a Conway Twitty album taken from smack dab in the middle of his hard country years (approx. 1965-1975): "Darling, You Know I Wouldn't Lie" (1969). Turning again to his go-to hardcore country lyricist Wayne Kemp (an old running mate from his days in Oklahoma City), Twitty scored his third consecutive Top 5 hit with the cheating-themed title track. A further exploration in song of Harlan Howard's "Life Turned Her That Way" theme presents itself on "Bad Girl", promptly followed by the corresponding "Bad Man". Interesting to note both tracks written by Twitty himself, who also added a dynamite hard country shuffle to round out Side A of the album in "Table In The Corner". Even the filler from this period in Conway's career is top-notch: a cover of Tom T. Hall's "Ballad Of Forty Dollars" rips as much as the original and even though it's hard to top a George Jones vocal, the Owen Bradley/Decca arrangement and production on "When The Grass Grows Over Me" and "Window Up Above" makes for superb listening. Quality stuff!