Larry Boone - One Way To Go 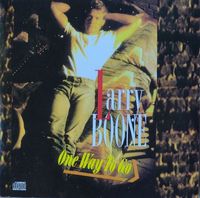 In this week's episode we're featuring an off-the-beaten-path slice of the neo-traditional era from Larry Boone: "One Way To Go" (1991). Boone's songwriting prowess was his main claim to fame, but with a solid country vocal, movie star good looks and three albums for Mercury and two for Columbia (including this one), Boone had his chances at solo stardom. It's mostly the era that's on the table this week: a time when country was country and the world wasn't so complicated (full disclosure: your host was a kid in the early 90s). Let the fiddle punctuation of Rob Hajacos, the dobro touches of Jerry Douglas and the ethereal steel guitar of Paul Franklin ease you into an enjoyable and nostalgic three hour trip back to 1991 this week with Larry Boone and "One Way To Go".