Caution! Eddie Bond Music Is Contagious: The Hard Country Side Of A Rockabilly Star 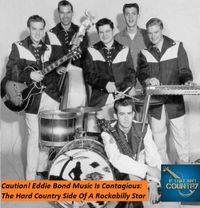 In this week's episode we're showcasing the country roots of revered Memphis-born rocker Eddie Bond: digging into Bond's back catalogue for some forgotten hard country magic and featuring a self-released LP from the 70s in tandem - "Caution: Eddie Bond Music Is Contagious". Bond's early influences were undoubtedly country and his time with The Snearly Ranch Boys before forming his own band The Stompers cemented those influences. Initially The Stompers themselves were essentially a country and western band with rockabilly overtones, taking in some legendary talent by the mid 50s including iconic steel guitarist John Hughey. But when rock 'n' roll hit Eddie Bond jumped on board, recording a slew of rockers (mostly for Mercury) between 1955-1957. Rediscovered twenty years later in the midst of the European rockabilly revival, Bond remains mostly remembered today for those rockabilly cuts but this week we're showcasing the hard country side this week of one of the few rockabillies actually born and bred in The Home Of The Blues.