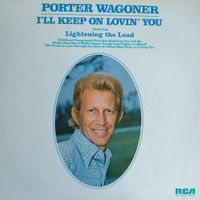 In this week's episode we're featuring a 1973 album from Porter Wagoner: "I'll Keep On Lovin' You". Porter was churning out three or four LPs a year for RCA at this point, his TV show was still as popular as ever and his duets with Dolly Parton were about near their commercial peak. The Grand Ole Opry star maintained a superb level of consistency in his traditional country output and does again here on our feature album. Buck Trent's electric banjo is front and centre on "Can You Tell Me" as is Porter's easy style of recitation (this reviewer is a sucker for those) on "Through The Eyes Of A Blind Man". And despite any working or personal differences that came after 1973, Wagoner was not too proud to use Dolly Parton's prodiguous skill as a writer on this album, cutting four from Dolly's pen including a couple of gems in "Jasper County Law" and "Talkin' To Myself". Like many Opry stars of the past, Wagoner doesn't get a whole lot of love in conversations about country music these days but as we'll discover, his back catalogue is absolutely worth exploring.