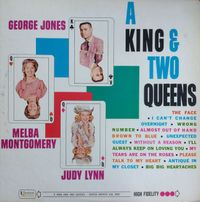 In this week's episode we've got a magnificent snapshot of the talented United Artists country roster: "A King & Two Queens" (1964). Initially conceived as a soundtrack-centric label in conjunction with it's film wing, United Artists Records later expanded to jazz and rock and roll. Furthermore, when the legendary Pappy Daily moved from Mercury/Starday to United Artists in 1962, he brought George Jones with him. Also along for the ride was the newly-signed Melba Montgomery and Judy Lynn, both fresh to UA in 1963 and 1962 respectively. Even though "A King & Two Queens" is a compilation of previously released material, pretty typical for the era, it feels slightly more cohesive in that each artist has four cuts and they rotate evenly throughout the LP. But more importantly is the quality of the material: straight ahead fiddle-and-steel honky tonk with no messing around. A snapshot of the small but mighty country roster at United Artists in 1964.