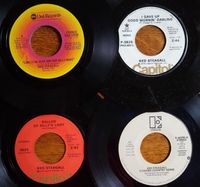 Red Steagall maintains that he was twenty-five years old before he knew anything other than mesquite trees, buffalo grass, barbed wire and Bob Wills. But after a move from his Texas Panhandle home to Hollywood in 1965, Steagall learnt quickly. During twenty years in the music business he worked with many of the biggest artists, producers, songwriters and musicians in country history. From running the West Coast office of United Artists Records to pitching songs to Frank Sinatra and Dean Martin with Jimmy Bowen as part of Amos Publications, Steagall learnt the ropes from the business end. His own solo career never reached the heights it should have and though he might not be a national household name, Steagall's western swing-infused country music catalogue remains sorely overlooked: from a box of 45RPM singles, this week's show is a deep dive into Steagall's cavernous body of work and a chance to re-discover "Texas Red".