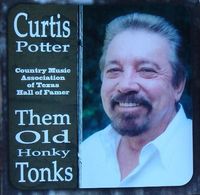 In this week's episode we're featuring the first of three albums compiled on the sensational Curtis Potter on Heart Of Texas Records: "Them Old Honky Tonks". Plucked from a budding career in Abilene in his late teens, Potter joined Hank Thompson's legendary Brazos Valley Boys as frontman and bass player and released his first solo album on Hank T.'s own label (Dot) in 1971. A working relationship with legendary producer and songwriter Ray Pennington began in about 1974 at RCA, but by the mid 80s Potter found himself without a contract. Initially co-founded by Pennington with the intention of giving Curtis Potter a home to record at, Step One Records was formed in 1984 and in those mid 80s, Potter and Pennington were busy in studio. The majority of that material, for whatever reason, remained unreleased until Pennington handed it over (with his blessing) to Potter, who sought to have it released at Heart Of Texas Records. Transferred untouched from the original reel-to-reel tapes, "Them Old Honky Tonks" became the first of three compiled albums from Potter's mid 80s time at Step One on Heart Of Texas: heavy on the honky tonk shuffles and heavy on twin fiddles and steel guitar. Curtis Potter, as a student of the "Ray Price school of singing", is in fine voice on this collection - unearthed from a period when Potter and Pennington were making some of the finest hard country music never heard until now.

NB. Big thanks to Justin Trevino for the help in compiling this episode!