Chris LeDoux - Whatcha Gonna Do With A Cowboy 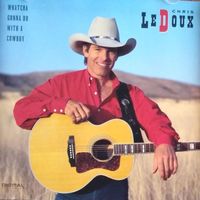 In this week's episode we're featuring an album from the commercial peak of singing cowboy Chris LeDoux: "Whatcha Gonna Do With A Cowboy" (1992). LeDoux's talent with a cowboy song earnt him a loyal fanbase and impressive sales as an independent artist over 22 albums in the 18 years to 1990. However, legitimate national stardom eluded him until a young Garth Brooks namechecked his idol in "Much Too Young (To Feel This Damn Old)" in 1989. Though radio barely allowed him a "hit", LeDoux's fanbase only continued to grow on the back of his signing with Liberty/Capitol as well as his relatable and sometimes high-energy material and stage show. Despite pyrotechnics and coast-to-coast touring, LeDoux remained a humble, down-to-earth and sometimes shy family man who's inspiration for music remained in the sport of rodeo, his wife, kids and life in The West.